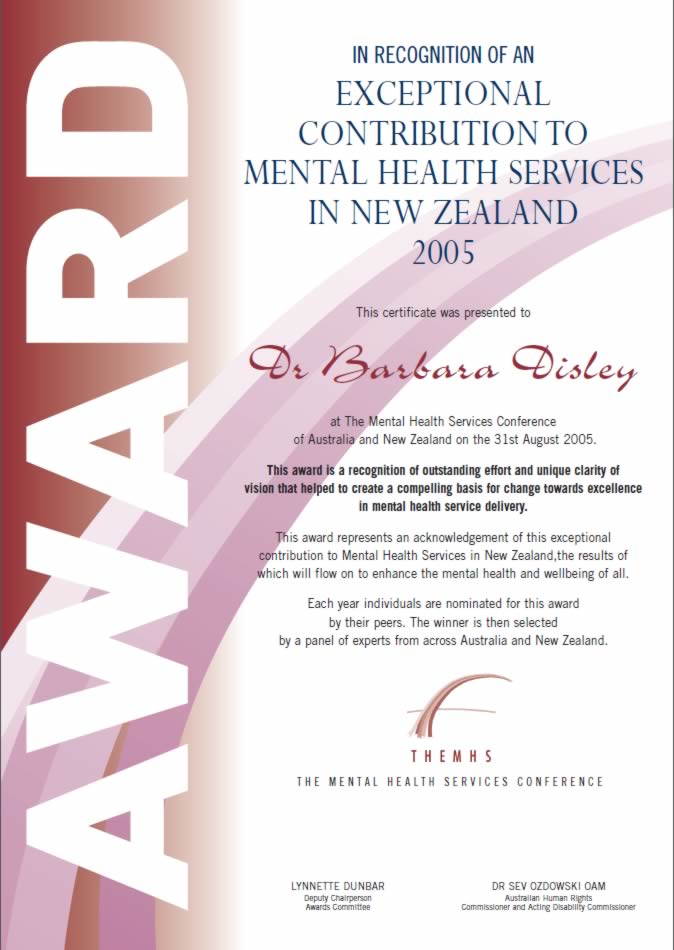 Abstract: Dr Barbara Disley worked extensively in the fields of mental health and in special needs. In her extremely active career in human services, she has demonstrated a rare combination of humanity, intellect, organisational ability and strategic understanding that enables her to see hope where others might despair and achieve results where others might flounder. She is an Educational Psychologist and gained a PhD with a thesis on teaching vocational skills to people with intellectual disabilities. Before coming to New Zealand Barbara worked in a variety of settings including being a Social Educator at Marsden Hospital in Sydney, a Manager of Staff Training and a Regional Advisor for a Community Health programme in NSW. In the early 1990’s Barbara entered the field of Mental Health taking up a position as Deputy Director in the Mental Health Foundation of New Zealand which at the time was the umbrella organisation for the nascent NGO sector. With her special efforts and abilities Barbara became involved in the Foundation as it lead the growing charge to alter and improve mental health services in the country. It played a significant part in focussing the attention of politicians on the needs of mental health consumers, through advocacy and mental health promotion and prevention and maintained its viability duuring the process shifting to a purchaser/provider split in Health. It was during latter period of the 1990’s however when Barbara became the first Chair of the newly founded Mental Health Commission of New Zealand that her most significant work in the Mental Health field was achieved and the combination of her unique abilities found expression in creating the basis for changing the landscape of Mental Health throughout the country. Barbara was able to wend her way through the complexities of the political mine field and those inherent in our sector. Based on the Ministry of Health’s National Strategy for Mental Health she and her team produced a number of core documents that literally provided that lattice work for a “Way Forward” in Mental Health. The most important document was the national “Blueprint” for the development of Mental Health which not only specified the range of services both public and NGO that needed to be provided to the general population but the staff profiles and recovery based philosophy to sustain them. Working in partnership with Janice Wilson, the Deputy Director General of Mental Health in the Ministry of Health, successive Health Ministers, consumers, families, clinicians and providers Barbara exerted both a strategic and practical influence the result of which are still being reaped by the Mental Health sector in New Zealand and further afield. While turning again in 2002 to her original field of Special Education as the CEO of Group Special Education for the Ministry of Education in New Zealand, Barbara continues to have an active interest in and advocacy for Mental Health.