SF 15 Session 3a – Jane Pirkis: Depression and suicidality in males 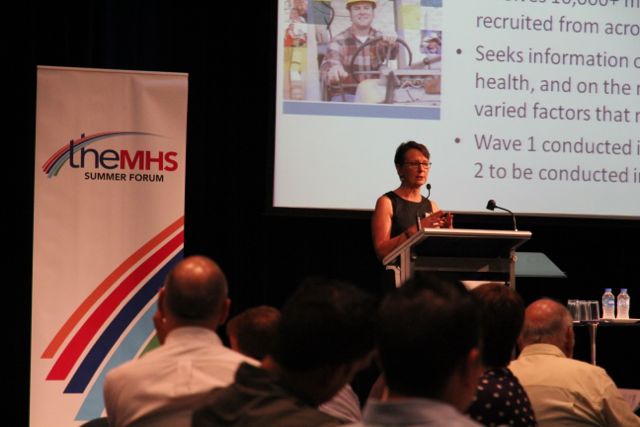 Jane Pirkis discussed the issue of depression and suicidal thoughts and behaviours in males. Jane first established the problem of males having mental health issues. In the large scale study of Ten to Men which included a sample of 16000 people, it was found that young men and male adults have very similar rates of suicidal ideation and behaviour.

There were many nods of agreement around the room when Jane commented that men are less likely to seek help for mental health issues. The 2007 National Survey of Mental Health and Wellbeing included 9000 Australians aged 18 to 85. Among those who had mental disorders, only 51% of males would consult a health professional compared to 73% of females. This gender difference was greatest among those with severe disorders.

Jane suggested that the media can perpetuate stigma about mental health problems but also has potential to encourage help seeking. In an experiment working with BeyondBlue, 10 past positive media stories involving mental health issues were selected. The volume of contact with helplines were then compared two weeks before and two weeks after the media stories were released. Helplines such as Lifeline, Mensline, SANE, Beyond Blue gave data including the date and location of call and gender of callers.

It was found that four stories that increased calls involved a role model (i.e. Ian Thorpe) and they included an optimistic view of recovery. Two stories were involving Beyond Blue campaigns which mentioned helplines. This suggests that the media can be useful in assisting men seeking help for mental health issues in some circumstances.

An exciting new project Jane has taken on, involves creating a documentary emphasising the promotion of resilience in males who are suffering from mental illness. 10 males with different backgrounds and circumstances will undertake evidence-based resilience-building exercises which will be accessible to viewers. It is hoped that this will help reduce the stigma of men’s mental health and provide engaging and educational information about helplines and therapies for men. She is currently looking for innovative and exciting ideas for the documentary so “watch this space!”