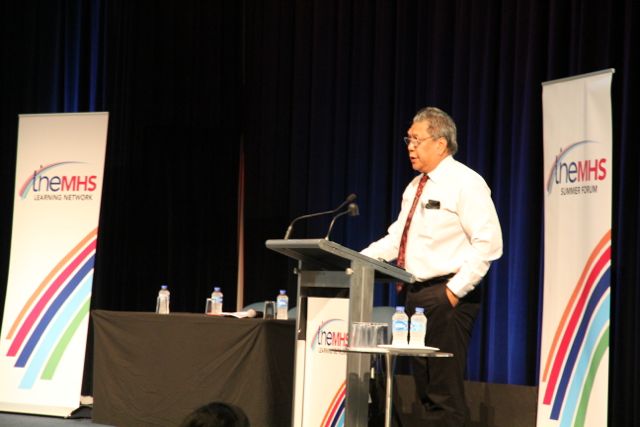 Mick Adams presented his thoughts on Aboriginal wellbeing and the problems with the current practice in many areas. He highlighted the influence of aboriginal culture and history on the wellbeing of many communities. Discourses surrounding mental health are often dominated by western perspectives not accounting for cultural differences or traditional knowledge. It is important to recognise that aboriginal concepts of wellbeing are associated with connection to the the ‘land, sea, trees and air’. When this connection is strained due to western intervention it can cause significant destress, particularly to young men.

He emphasised Aboriginal communities wide spread ‘grief, loss, trauma and ongoing disadvantage’ due to their tragic past still affecting future generations. He questions ‘how can we move on when we are still dominated by rules of a dominant society that restricts how we should live and behave?’

The loss of cultural identity and autonomy in Aboriginal communities has manifested in many psychological and social issues. Aboriginal people on average suffer from higher rates of suicide, substance abuse and violence, this is exacerbated by the lack of access to mental health facilities. These rates are indicative of the poor social, emotional and psychological state of the community at large. Mick emphasised the grief generated by adolescent suicide on communities which can lead to self-harm and aggression. He argued for a more holistic approach, blending traditional aboriginal and western systems to create interventions that will increase aboriginal peoples involvement and willingness to seek help.

Mick holds a PhD in Public Health from Queensland University of Technology (QUT) and a Master of Arts (Indigenous Research & Development), Centre for Aboriginal Studies, Curtin University of Technology. Prior to undertaking his postgraduate studies he undertook at Bachelor of Social Work, a Bachelor of Applied Science (Aboriginal Community Management and Development), an Associate Diploma in Social Work and a Community Development Certificate.