SF 15 Session 7a – Chris Laming: Constructing hope beyond despair in a men’s behaviour change program to challenge violence against women and children 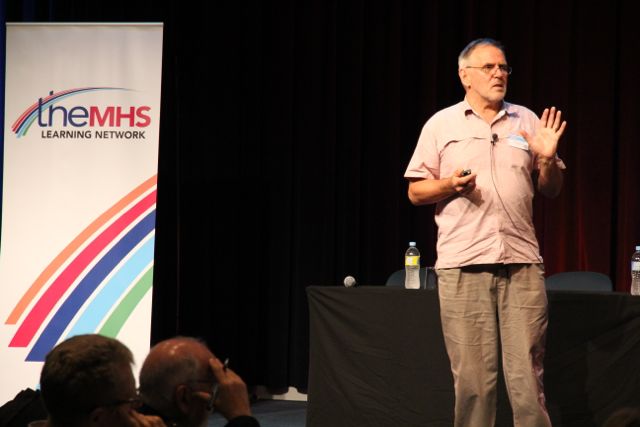 Chris Laming is a social worker and the founding coordinator of the SHED (Self-Help Ending Domestics) Project. He has also completed research examining constructivist approaches that enable men to change violence.

Chris began by discussing his past experiences with social work and volunteering, noting that there were reactive services for women and children who were victims of domestic violence, but wondered where the services were for the men who perpetrated the violence. He began research into that area, and later moved to a country town where he started the SHED project. In line with Chris’s concern about a lack of services for men’s violence, he named the few examples of integrated service response to men’s violence that he had been able to find in the literature:

In response to this gap, Chris developed the SHED project, which aims to increase the safety of women and children by addressing violent behaviour of men, helping men take responsibility for their behaviour in a safe space, and learn how to relate non-abusively with their partners and families. The SHED approach is based on applied research into best practice frameworks for men’s behaviour change programs. It utilizes personal construct theory, a theory of personality and cognition developed by psychologist George Kelly in the 1950s.

Chris noted that a common theme that came up for men in the group sessions was feeling trapped and lacking hope that things could change. He emphasised the importance of instilling personal responsibility for behaviour, as well as hope that they could change their behaviour. There is a focus on personal choice and accountability. Chris made the point that men are not born violent; this behaviour is learnt.

Chris described the men that he sees at the SHED project. He said that about half had seriously contemplated suicide and a quarter had received psychiatric treatment. There was a high level of substance use, prison history was common, and many of the men had been victims of violence themselves. He said that some men were mandated to attend the service, but there were also many who attended voluntarily.

Chris described some key aspects of the SHED project, such as condemning violent behaviour but not the man, men learning from each other and challenging each other, and providing links to a network of services. He ended with a message of hope; men can change and there is hope for men who use violence and their families.

Family safety: A toolkit for men, by Chris Laming and Michael Fontana.