SF14 Session 8: Trauma and its effects on young people and those who care about them 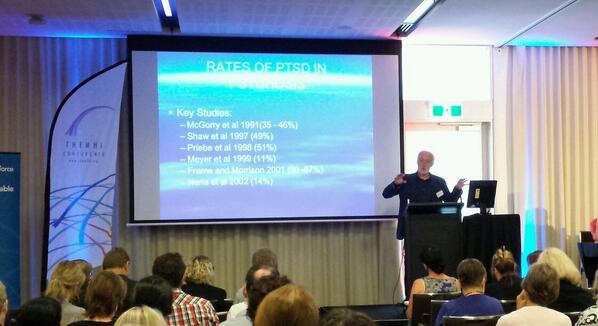 Professor McGorry's interest in trauma began early in his career, and is one of the reasons he became involved in the mental health arena. He has worked with people presenting with psychosi,s and with asylum seekers, both experiences being associated with trauma. Trauma, he says, has been recognised as a risk factor for mental health. A large proportion of consumers have experienced trauma in their lives. For example, it is increasingly becoming apparent that trauma is a risk factor for schizophrenia. One study compared Vietnam veterans with PTSD to people with schizophrenia and revealed that both groups had the same level of negative symptoms, and many of the same symptoms of PTSD, such as a "shut-down" and withdrawal.

Other observations have raised the question of negative symptoms associated with schizophrenia are a reaction to the trauma/stress related to psychosis. Despite this, at the present stage evidence-based treatment for trauma preceding schizophrenia is limited and reductionistic. Prof. McGorry emphasised that picking just one approach to psychosis, usually one emphasising either the experience of trauma or the condition's biological underpinnings, is not sufficient. Rather, he states clinicians need to take a dual approach.

Professor McGorry reviewed data from several studies showing how people who present with psychosis experience entering the mental health systems for the first time as traumatic. The psychiatric institutions are experienced as frightening to consumers, and the events can be re-experienced as nightmares and in the form of PSTD like symptoms. A study found that in up to 25% percent of cases, therapeutic response/care was experienced as traumatic, and includes the use of police/security and restraints such as handcuffs. In particular, a study found that in a cohort of 600 patients who presented with first episode psychosis, many had a significant history of physical and sexual abuse. Furthermore, these patients experienced delayed functioning, a higher risk of suicide attempts, and delays in getting treatment.

Professor McGorry goes on to emphasise that workplace trauma is also relevant to mental health workers, adding that PTSD is common among mental health professionals. After being exposed to a traumatic experience up to 17% have symptoms of PTSD. Relevant stressors include:

Importantly, such conditions foster burnout, in addition to stigma around mental health, and are not being supported adequately. Professor McGorry emphasised that psychiatry is a “special” profession which involves more difficult work. He has observed that workers in psychiatric institutions are often shut down. He asks, “is this a defensive or self preservation response to conditions?”

He suggested some remedies:

He concludes his talk by saying that practitioners need to be more culturally minded and more flexible by going out and engaging with the client in their community, this in order to establish “the real relationship”. Unfortunately, the way many mental health institutions are structured today, with more rigid externally determined procedures, may prevent an organic response to a workplace trauma. Mental health services and professional need to become more community focused.