TheMHS 2015 Session 9b: Recovery from the effects of combat – a modern personal story 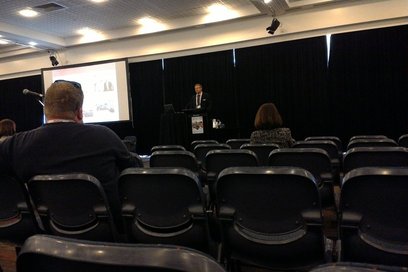 ACT local Rob Pickersgill shared memories from his military career, which began 23 years ago at the age of 17. His story and deployment career began in 1994 when he was sent to Rwanda on a medical peacekeeping mission. It was here that he experienced significant trauma, that was to follow him throughout the rest of his career.

Reacting to medical emergencies in the violent landscape of war, Rob was the first response to a Rwandan soldier - who had been shot in the chest by fellow soldiers, for falling asleep. The soldier died from his wounds four days later. This was two weeks into Rob's first deployment.

"It did take the life of a young boy, approximately 10 years old. He was selling lemonade across the street."

Rob went on to experience a second car bomb attack not long after. But after leaving the military that he found his skills as a soldier were not enough to carry him through normal life.

He became emotional without knowing why, as his mental state declined, he recalls, "I knew I wasn't right psychologically." Struggling, Rob was resistant to seeking help, instead distancing himself from family and friends, "I thought If I could just shake 'em off, I'd be okay."

This went on until Rob Pickersgill eventually collapsed. Realising that this was his body and mind, telling him he needed help, Rob spent the next 12 months relearning who he was. Turning to the support of family and friends, Rob discovered, "The help existed all along, I just had to ask."

Rob sought out connections to others with similar experiences, finding commonality and that he was "not a complete nutcase." He learnt new skills that were needed to deal with trauma. He connected with family and those around him and now works to ensure there are support and connections for others in struggles similar to his.

In closing, Rob explained that for those suffering from the strains of war, there was help out there and that the key to survival was connecting to those around you. And knowing you aren't alone.